The last month we had Alexa Ranking record. 30 days passed, now how our website's ranking is?

We mentioned we came back to maintain GoGoToTo.com, now the visiting traffic is better and better. The Alexa ranking was 1,918,259 in last month.

Here is the ranking today:

We see the Global ranking of GoGoToTo is 1,073,838, compared to the last month number 1,918,259, we increased 844,421 globally in one month; and the Canada Rank is 16,609 now which is compared to the last number which was $43,369, it increased 26,760 in one month; Both 2 ranking numbers are insignificant if they are compared to other bigger websites, but compared to ourselves, the ranking increasing is great. It encourages us to continue maintain the website, and forces us to learn more web and content publishing skills. The following is engaging data, it is still good

The downside is: The search Traffic keeps dropping down to 85% now, which is bad. What we guess is because there have been more and more traffic came from society website such as Facebook, Twitter… etc.. So we guess this searching traffic data does not change too much actually. 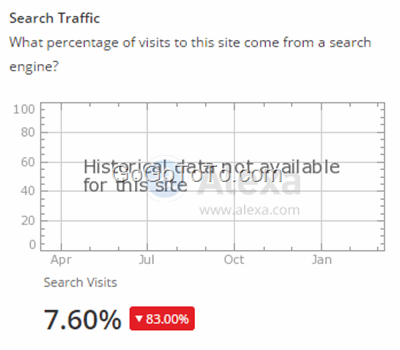